Posted on January 24, 2020February 7, 2021By prisonerofhope
Posted in Monalisa JohnsonPrisoner Of Hope

It’s now been a little over two years since my daughter was released from prison. A lot has happened since this time.
When Sierra was inside, she had a lot of time to think and consider what her future might look like. During her time, she took to drawing. She wasn’t aware that she had an ounce of artistic ability, until her time in prison, where she discovered she had a real gift for it. She started sending home drawings to me, and I showed some to high-end artists, who basically commented that they had never seen such precision from someone without any formal training.

It was during this time that she discovered her love of art. While she was inside, my daughter not only had time to think about how to rehabilitate herself, work through the remorse and ultimately find self-forgiveness but, also had time to focus on her imagination and grow her artistic gift.
When she was released, she came to stay with me, where she took time for herself. She needed time to readjust to the outside before moving forward with her future. But, after about eight months, she enrolled in the world-famous Make-Up Designory in New York for prosthetic makeup for film and TV. She has since graduated.
Sierra has found it’s hard to find work, but she started her own art business. Her record can make it difficult to find work, because, unfortunately, many people aren’t willing to give convicted felons a second chance. It makes you wonder why we think college is a good choice for returning citizens when most people won’t even hire them? Which makes the degree almost useless all the while heaping on debt for student loans. Even in New York, where “Ban the Box” was set into law back in 2017. This refers to removing the box that asks applicants if they have a record. However, many employers still have this box on their applications, even after this legislation was passed, because it’s not enforced. 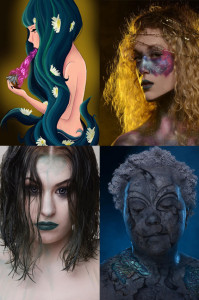 This is something we need to consider as we move forward in our society. One of the struggles that people often face after being released from prison is the reality of how hard it is to start over. One of the main reasons being that it can be incredibly hard to find work. When this box is listed on pre-employment paperwork, it encourages employers to simply throw out the application if someone checks yes, instead of giving the applicant a chance to prove themselves.
My daughter has not lost hope in finding work. She made a mistake and paid for it… However, she’s talented and educated but wishes more people would understand the struggles of finding work after imprisonment.
We both wish that more people would give other people another chance. People pay the price for their actions by serving time, yet they often feel like they continue to pay the price after serving because of how others look at them – not offering empathy or an opportunity for a second chance through employment.
Sierra has worked hard to get where she is today, and she will continue to meet challenges and work towards her goals. I’m prayerful to see where she goes. But, I also want to encourage our society to think twice about how our culture currently treats those previously incarcerated. Our society is in need of some serious empathy in order to move forward and encourage more second chances. Because at the end of the day the family unit is being broken down one person at a time when we choose not to care.
If you’d like to follow Sierra and see some of her art, you can visit her Instagram page. She’s a phenomenal painter, artist and digital illustrator with a special passion for prosthetic makeup.
If you have jobs for returning citizens available email me at info@pwicus.com so I can share them with our followers.
Sierra's Instagram Page

Posted on December 9, 2021December 12, 2021By prisonerofhope
Posted in Monalisa JohnsonPrisoner Of Hope

Positive thoughts are everything… A mindset shift is in the cards!

A positive mindset can make all the difference. In fact, it’s been shown to reduce the risk of

Posted on July 9, 2020February 7, 2021By prisonerofhope
Posted in Monalisa JohnsonPrisoner Of Hope

When you see someone around you in pain or suffering, you probably have the urge to console them.